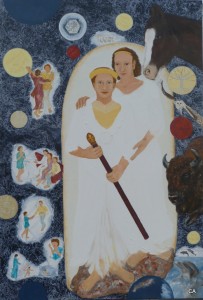 The idea to this painting came during the Dreamwalk with Adamus Saint- Germain to the Near- Earth- realms on Halloween with the angelic being accompanying me.
First I thought, it was me, female and my companion Maya, who is also female. When painting the faces and postures, they changed their gender, me becoming very male and the other first stayed female, but adding the hair, she changed into being male and me- into female again…and I realized there is a melding happening within me with the male and female parts, being shown to me in the process of expressing. What a miracle!
Going on with this creation I realized, I didn’t want to have any spucks around me- nomore! and I decided to draw all the beauty into my space, that I love so much…
So I first painted the crystall, that I recently had bought to put in a special place in my garden, where some of the ‘Little folks’ are living.
After finishing it  I wanted to bring it into my garden, when I suddenly lost one step and fell- and the crystall was in a thousand pieces…no, just some, but anyways.
I asked Kuthumi about this and he acknowledged, that this was indeed something extremely beautiful, that had happened:
the energy with painting it in the intention to connect with the crystallin realms and New Energy was so strong, that (I fell down-) it could just burst itself into many beautiful pieces and release the old- since lemuria captured- energies, set them free  to give birth to them in New Energy!
Next day I took on in painting ‘me dancing with Kuthumi’ and then the presents I received during the 4-weeks- course with Kuthumi/ Erno.
The love and joy, that I experienced being welcomed by Kuthumi and other loving angelic beings etc..
Then I decided to draw the pakauwahs in and then beautiful potentials, that belong to living in the New Energy on this earth as a Human Divine….
The last one was the little red one on the left side above and first I didn’t know, what it should represent, I thought maybe ‘SEX’, but that would effect too much projections and focus, so I decided ‘TRUTH’ and when writing the letters T R U, I suddenly realized, it was ‘TRUST’…
and that is the very core- potential, that I’m about to receive…
The background of the paiting has a cristalline structure, representing how it is possible to expand into the Cristallin Realms, whereas at the same time being here on earth in physical form.

Here You can see a few photos with still empty spaces waiting to be filled: