Many original pieces of art, Paintings and sculptures and a special surprise for you!

The surprise:
The first TEN people, that buy a piece of ART, will get a second painting for free!!!

This promotion is valid until December 31, 2021

I want to offer a very special discount of 50% on my paintings until Christmas, so you can gift yourself or a loved one with an original piece of ART- work.
The serie, posted here, I created some years ago.
Back then it has been for me all about integrating the energies of the elements earth, fire, water and air within my body of consciuosness. When painting the animals, I connected deeply with their spirit, so their energies are so very lifely and present within the paintings. What I became aware of, is, that the animals are completely induldged with the specific element, they are living in and yes, they even make these elements come alive and dance!
It’s like when we sing in tune with our SOUL and thus creating the New Earth.

The discount runs too, for many other art- works, that you can find here in the Galery of my website
When interested to purchase one of my works of art, please contact me with my e-mail: info@corakunst.de

This Mosaic- Column, standing beneath the entrance to my house, I completed last week together with Kuthumis presence and his inspiration!
When doing my art, it’s always very experiencial, an act of consciousness, bringing about, what I became aware of internally.
The column stands straight like a lighthouse and doesn’t it even look like a huge scepter…?
The mosaic thereon symbolizes the union of the opposites, the dance of two, producing a third, that turns to again be a ONE: NEW LIFE!
It shows the melting together in a DANCE, Human and Soul, the Earthly and the Divine, Male and Female…
It consists of a leftturning and a rightturning tendril (in reference to the left and right turning energies of the northern and southern hemisphere), crossing each other in their way up.
Then there are the vertical stems with the blooming flowers and the horizontal stalks of the buds, symbol of inherent potentials. These two ascending dancing lines in violett and yellow glasstones are in complementary colours.
The young man, helping me in the beginning with flexing the concrete column, responded, when I told him about the right- and leftturning energies, that I intended to build on the column: ‚Oh, and where they meet, there will be a great explosion …!‘
In the course of doing this I realized, it took a hell of a lot of bodywork, quite exceeding the usual, normal limits. So each further day, instead of taking some rest on the sofa, I would gather my bodys energies in loving cooperation, my motivation flying high. I just love to do such work, to me it’s much more fun than sports!

I’m so excited and grateful about the creation, that I just completed together with Kuthumi. It’s a video about the ‚AHMYO‘- painting in both languages, English and German.
The painting I did about 10 years ago and it’s amazing, how the energies therein always expand in the course of time in their relevance.
The next WISDOM&ART- Meeting over ZOOM, at which the ‘AHMYO’- Painting serves as topic – background is going to start
at Thursday, 28th of October 2021 at 7pm
Here the LINK to the ZOOM- Meeting:
https://us02web.zoom.us/j/7559229886
Meeting-ID: 755 922 9886
Here the Link to the painting- video:
https://youtu.be/2fsHrWLqiQk
🌟💖

So, dear English- speaking folks, here’s the English version of the ‘Snake’- video! The beautiful messages in the subtitles were given and channeled from the Snakes, each one of them! To me the energies come through equally to the one in German language…, enjoy! 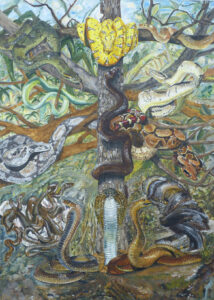